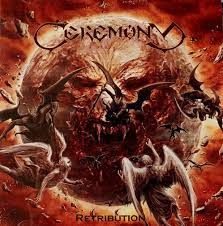 Founded in the early 1990s, they created their own sound in the technical death metal genre, which was later featured on their debut album Tyranny from above, released in 1993. After their absence of about 20 years, Ceremony has risen out of the darkness. The result is the blackened death metal, full-length, album “Retribution”, released in 2019 by VIC records. Retribution represents the new style of Ceremony as the third album is being formed.